The Dachshund: Remarkable Facts about this Fierce Breed

Hello again all you dog lovers! Time for the next installment of our breed blogs! The pup we’re thinking of this week is a quirky-shaped, fiercely loyal dog with a big personality in a small package. Do you know which breed it is yet? The Dachshund! That’s right, the Dachshund has long been a popular breed in its 300 year history with famous owners such as Andy Warhol, Picasso and Queen Victoria. They were also the first Olympic mascot for the Munich Games in 1972! So read ahead for more interesting facts about this spunky little breed. PetCenter always has Dachshund puppies for sale! 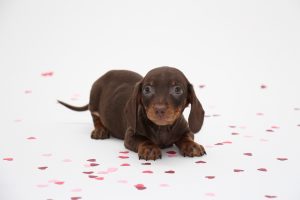 The AKC first recognized the Dachshund breed in 1885 and they were originally only black and tan and one size. However, since then, the Dachshund has become one of the breeds that have the most varieties recognized. The Dachshund comes in 12 standard colors and three different kinds of markings. They also have two accepted sizes, standard and miniature and their coats can be smooth, long or wire-haired. That’s a lot of choices for a new owner!

Because of the Dachshund’s unique shape, it makes it one of the most recognized breeds out there. However, they weren’t bred this way for cuteness! Over 300 years ago, they were originally bred to hunt badgers. Their name literally means “badger dog” in German. Their short legs and fierce nature allow them to enter badger dens and take on animals larger than they are in the small spaces. And as far as the body is concerned, it has been said that the modern day hot dog is, in fact, named after this spunky little breed as they were the favored companion of German butchers!

Dachshunds are a formidable breed.

In addition to being currently 11th most popular breed in America, they have many qualities that make them a great companion. They are rated as the smallest hound dogs and make wonderful rodent hunters. They also serve as exceptional guard dogs, alerting family members to possible intruders (or the occasional mailman). And, finally, they are well known for their athleticism and courage, which made them a perfect mascot for the Olympic Games!

We surely hope you enjoyed this breed blog on the Dachshund!