Their piercing blue eyes and stand-out-in-the-crowd multicolor coats command the attention of dog owners and passersby time and time again.

We’re talking about the Australian Shepherd for sale that we have at our location. They are certainly one of a kind. We’ve compiled 5 of the most compelling facts about them. Read on to learn more about these colorful beauties! 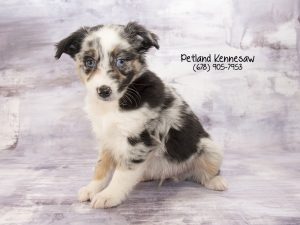 Despite their name, there’s debate surrounding their origins. These dogs do not hail from Australia. Most believe that they have roots in the Pyrenees Mountains, which borders Spain and France. Some believe that local herders came to the United States for work and stopped in Australia, sometime in the late 1800’s. Most agree, however, that the breed was perfected in the United States, as herders from around the world made their way to the west coast with their dogs. It’s believed that the Scotch Collie, Border Collie, and English Shepherd have contributed heavily to the breed development and perfection. We’re just happy that we have the Australian Shepherd for sale nowadays!

Because of their high intelligence and easy trainability, they were perfect for the rodeo. They gracefully jumped rope, ran through barrels, and performed tricks. Australian Shepherds were eventually made famous by starring in popular Disney movies.

Because they are historically working dogs, they’ve always been able to conduct many jobs. Besides herding and performing tricks, they make excellent search and rescue dogs, and serve as therapy dogs, as well. Our Australian Shepherd for sale can easily adapt to any task presented!

It’s true and they just might herd your kids! This happens when they’re bored and is almost like their signals to play or go out!

People who are familiar with the breed are well aware of their striking blue eyes. They’re undeniably hard to miss. Long ago, Native American tribes considered them to be sacred, referring to them as the “ghost eye dog.” And speaking of their eyes, it’s not uncommon for them to be mismatched and come in other colors such as amber, hazel, green, or brown. They have been called “marble eyes,” because of the various mesmerizing mixtures.