Have you fallen in love with a certain fluffy, big personality in a small body, short-legged dogs?

You know what we’re referring to right now, Pembroke Welsh Corgi puppies! You’ve been searching “Corgi puppies for sale near me” for some time now and you’ve finally made your decision to get one of those adorable Corgi puppies. Are you well informed about this beautiful breed? Take some time to read 5 fun facts about them. While you’re at it, take a look at our available puppies page to see pics of our Corgi puppies.

We think this is one of the most commonly known facts because Corgis have been pictured so often with the Queen of England. She has really popularized them without even knowing or trying. Queen Elizabeth II has had over 30 Corgis in her lifetime. Across the pond, we tend to think their royalty is why so many Americans searched “Corgi puppies for sale near me,” in attempts to grab a piece of royalty! 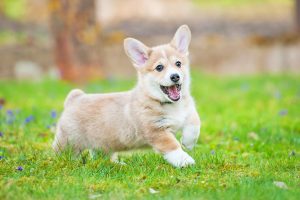 Fact Two: There Are Two!

Fact Three: Have You Heard That They Herd?

Kinda hard to believe that these little ones were once herders, but they were and they were darn good at it. Back in the 10th century, pastures were considered common land, so there were no fences. In order to keep cattle together, the Welsh Corgis would nip at their legs to herd them.

In 1107, Flemish weavers migrated to Wales and bred the Spitz-type dog with the original Cardigan Corgis. The result was Pembroke Welsh Corgi puppies.

Fact Five: They Got Their Individuality

There were two types of Corgis registered as one in 1925, which caused a little controversy in the breeding community. After about a decade filled with a lot of back and forth, they were finally recognized as two separate breeds in 1934.

At PetCenter, we always have Corgi puppies in our stores, so search no more for “Corgi puppies for sale near me,” because we have exactly what you want. Give us a call today!