The Yorkshire Terrier – Interesting Facts About this Tiny Breed!

The Yorkshire Terrier is the 6th favorite breed in America and for good reason! These pint-sized pups are as feisty as they are lovable and they have a very interesting past. Read along as we increase your breed knowledge with these fun facts about the Yorkshire Terrier! Here at PetCenter Old Bridge, we always have Yorkie puppies for sale! 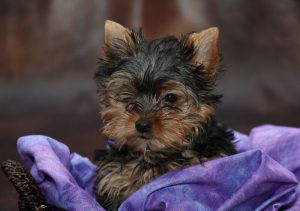 1. Yorkies Were One of the First Registered Breeds in the AKC

Even though the Yorkie is not a particularly old breed, these teeny dogs were one of the AKC’S original breeds. Yorkshire terriers became registered in 1885 along with a few other favorites like the basset hound, beagle and bull terrier.

While today the Yorkie is popular as a companion breed, they started out originally in the 1800s as being effective ratters. Over the years, the Yorkshire Terrier breed has became slightly smaller, but no less tenacious! We think the Yorkie still retains that innate feistiness that made them great exterminators.

3. The Father of the Yorkshire Terrier Was a Show Champion

Yorkshire Terriers descend from several similar terrier breeds, some of which no longer exist, such as the Black-and-Tan Terrier. But the one dog considered the father of the breed was a champion show dog named Huddersfield Ben. He lived only six years, but won more than 70 prizes and sired many Yorkies, laying the foundation for the breed.

4. The Yorkshire Terrier Used to Be Called By a Different Name

5. Smoky the Yorkie Was a World War II Hero

An America soldier fighting in the Pacific during World War II found a Yorkshire Terrier puppy lost in a foxhole. He named her Smoky, and she went on to become an American war hero. At first, Smoky visited injured American soldiers, making her one of the first therapy dogs. She later advanced to even more tactical work, stringing communication lines between outposts in the Philippines.

Yorkies are part of the non-shedding group, so they rely on their owners for grooming. Their hair is similar to a person’s and it will continue to grow, sometimes up to two feet long! And while show dogs will have the much longer, breed-specific cut, most owners keep their Yorkies in a “puppy cut” to keep from having the daunting task of brushing out the coat several times a day.

If you have ever been around a Yorkie, you know that their bravery and boldness know no bounds! They may be small (unbeknownst to them, of course), but they have the countenance of a large breed dog and will protect their owners at all costs. Last year, a 6-pound Yorkie in New Jersey even chased off a hungry bear that wandered into the dog’s home and threatened its owner!

Because the Yorkie is so popular (and has been for many years!), we try to have this breed in our store at all times, all you have to do is check our available puppies page to see our Yorkie puppies for sale! Want to know more about the Yorkie? Check out our breed info page!

The Yorkshire Terrier is such a great breed for so many different types of people and our Pet Counselors have no problem letting you know if this breed is best for you. We encourage our customers to play and interact with our puppies before they make the big decision to take them home. So stop by today if you think yorkie puppies for sale might be a great addition to your family!